Every live game. Every Sunday. Only on DIRECTV.
Get the 2021 season of NFL SUNDAY TICKET included at no extra cost with CHOICE™ package or above.
With CHOICE, ULTIMATE, and PREMIER Package (min. $74.99/mo. for 12 mo. before discounts; Prices higher in 2nd year. Regional Sports Fee up to $9.99/mo. applies). 24-mo. agreement required. See Details
View packages

Is there anything more satisfying than finding a TV show that feels like it was created just for you? There’s no doubt that we live in the “golden age of television” with more of a variety of content available for the average consumer than ever before. With quality of programming on the rise, millions of people settle in front of the TV each night searching for a show that appeals directly their particular taste.

What draws you in and makes you a binge watcher? Is it characters you can relate to? Is it a desire to feel empathy with a lead? Might the gender of the main character play a role? If that’s the case, there is a long way to go to create a legacy of gender parity for TVs leading players.

To get to the numbers, we looked at trends behind the 250 internationally top rated TV shows on IMDb and analyzed gender statistics in the most popular programs since 1950. The idea was to discover what, if anything, is beginning to balance when it comes to representation on the most critically well-regarded TV. Were more female leads beginning to propel highly-ranked shows that critics and consumers love? 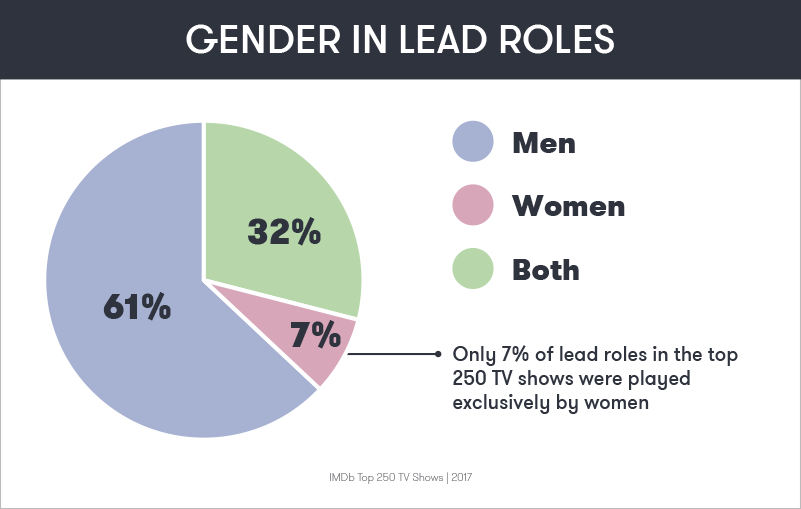 The very first U.S. TV sitcom, The Goldbergs (the original from 1951), starred a female protagonist in Gertrude Berg. In addition, arguably the most iconic American sitcom I Love Lucy has aired on millions of television screens around the world. Seemingly this would prove that women in leading roles could garner ratings and praise. However, research indicates that since 1950, only 7% of the most critically acclaimed TV lead roles have been played by women.

Currently, the first female led program featured on the IMDb 250 top rated TV shows list is The Crown helmed by Claire Foy as Queen Elizabeth II, coming in at #58, which notably only came out in 2016. That means that the top 25% of shows ranked internationally have leads played by either men, or (like #42: Seinfeld) are ensemble based. Check this table to see the gender gap in lead roles in all 250 TV shows listed:

Though not close to balanced, female protagonists in highly ranked programs have increased over the past 30 years, reaching about a 70 percent to 30 percent split in the early 2000s. Trends toward parity have actually started to wane more recently. Ensemble-based shows are gaining ground and this trend seems to be digging deeply into female led programming but not male. 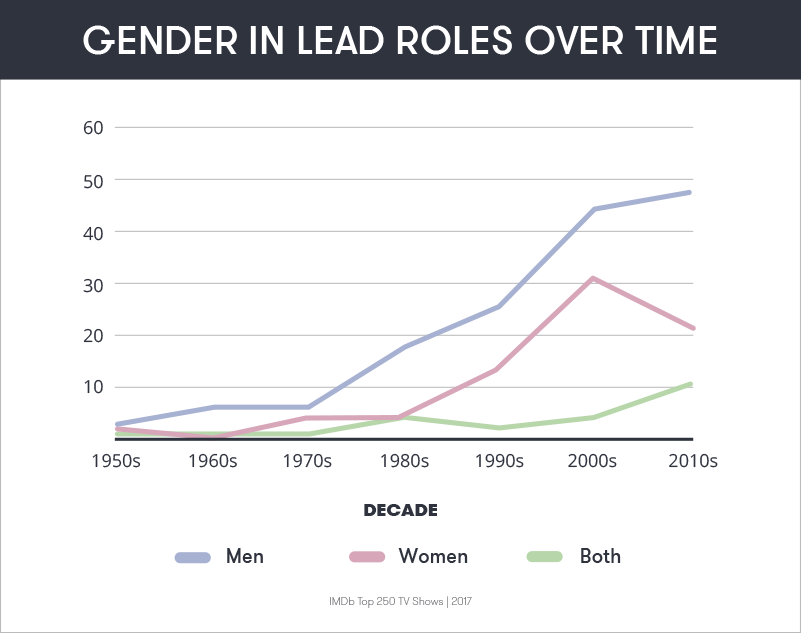 By delving into specific genres of TV, we were able to present a glimpse into what kind of programming most allowed for the success of female leads. Out of the just 17 purely female-led programs, the majority were classified as drama with only two, Broad City and Parks & Recreation, classified as comedies. Both of these shows are from the last decade, demonstrating a potential uptick in women-led comedy for the future. Groundbreaking shows like HBO’s Insecure (starring Issa Rae) or Crazy-Ex Girlfriend (starring Rachel Bloom), while not on this list, might still make waves as they begin to reach a broader audience. 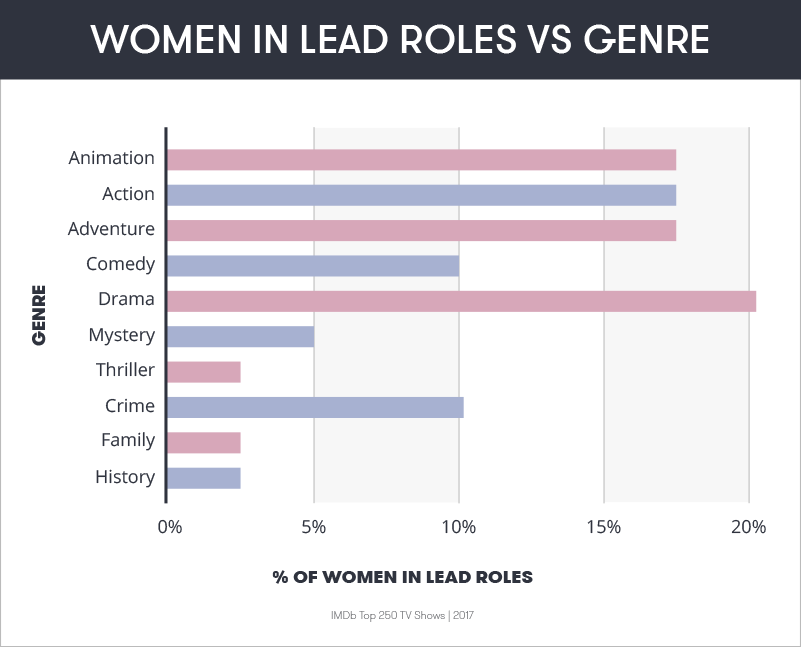 To look at a more general metric beyond TV criticism, a fascinating study by USC’s Annenberg School reported that out of the 11,306 speaking characters they evaluated in shows from 2014 – 2015, only 33.5% were female. That being said, television had much better speaking role parity than film. When studying leading roles, 42% of TV series regulars were female.

Streaming-service based TV presented the most females as principal characters (44.2%), followed by broadcast (41.6%) and cable (41%). This seems to imply some improved representation during the golden age of television, with film lagging well behind (33%). However, if we look behind the scenes, the situation continues to be pretty extreme. According to this same study, male directors outnumber female 5 to 1. 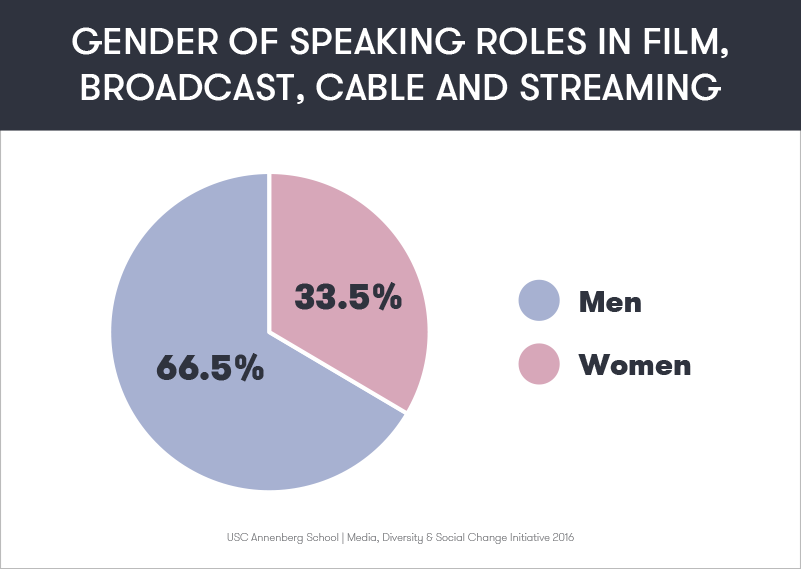 An audience for women’s programming is already in place and it turns out women watch significantly more TV than men. According to Techcrunch, a 2012 Nielsen study indicates that women actually spend about 40 more minutes watching television per day — 4 hours, 11 minutes for women with men consuming only 3 hours 34 minutes. It’s plausible that as recognition of gender equality issues continues to rise, and opportunities for expanded female-led programming becoming available, all consumers (but especially women) are more likely to gravitate toward shows that have females in the lead role.

Socially, it is clear that the issue of gender parity is gaining in importance. A recent dust up at Adult Swim, for example, regarding a lack of women directors, garnered national attention and led to several resignations from the network. Simultaneously, women in entertainment, as well as those in hundreds of other professions, have been speaking out about the gender gap, giving the topic broader attention. For example, in interview with the Evening Standard, film star Rachel Weisz quipped, “It’s clear women…are not represented enough in leading roles… But the problem isn’t film, the problem is culture – women in all positions across the board. Everything is out of control.” Below are 5 women working in entertainment who have been outspoken regarding gender equality:

To bring things back under “control,” television that is designed to target specific audiences is on the rise. Hopefully this trend will mean that, in future, a lack of gender parity will not only be a question of improved visibility, but one of viable shows that garner acclaim and make equal representation more profitable.

When referring to the Top 250 IMDb shows, we pulled the gender of the lead role, air date and ranking. To ensure the most accurate results, we removed documentaries that weren’t suitable for the study, which cut the control group to 235 TV shows. We made note of more ensemble shows with several lead characters of each gender and eliminated these from the overall findings. However, we must acknowledge that this is a subjective list and that several seminal female-led programs i.e. Girls, Rosanne, Buffy the Vampire Slayer, Sex & The City, The Golden Girls, Mary Tyler Moore and many more did not make this list as it was based on one specific metric. The IMDb Top TV Shows list used in this study was pulled in May 2017 and may not mirror the current rankings because the list is updated frequently.

Speak with a sales agent